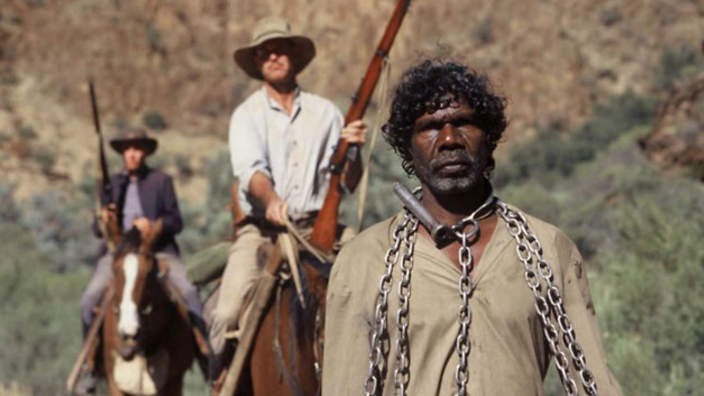 When a white woman is murdered in 1920s Australia, a police officer (Gary Sweet) ventures into the outback with a small crew in search of the aboriginal fugitive (Noel Wilton) accused of the crime. In his group are a newcomer to the country (Damon Gameau), an old sage (Grant Page) and an indigenous tracker (David Gulpilil) who is not fully trusted by the racially prejudiced officer. As the pursuit through this dangerous territory drags on, tensions begin to rise between the crew members.

“A stark moral fable told in the language of the sort of western Hollywood has stopped making, the Australian director Rolf de Heer’s film The Tracker is constructed around a suite of 10 interlocking story-songs that simmer with political outrage. Composed by Graham Tardif, with lyrics by Mr. de Heer, and performed by Archie Roach, a husky-voiced Aboriginal singer, together they suggest an extended folk ballad in the mode of Curtis Mayfield’s Superfly. The lyrics describe the oppression of Australian Aboriginals with the same mixture of sorrow and resistance that fueled the songs of Bob Marley.” – The New York Times.