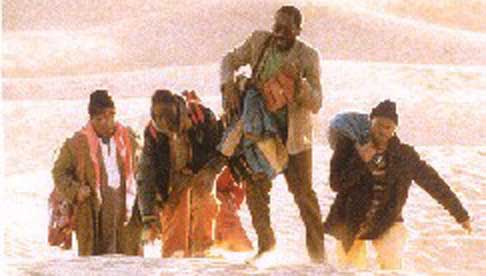 share
Six men and a woman set out on the hazardous journey from Senegal to Morocco in a bid to slip illegally into Europe to escape from the poverty and internecine warfare of Africa. All are lured by the promise of a better life, but the challenges are numerous. Passing through the hands of various smugglers, they cross the desert of Mauritania and Algeria, first in a pick up, then in the back of refrigerated fish trucks, and are finally dumped and forced to walk to the Moroccan border. Though each is lured by a different reason, they unite to overcome obstacles and finally reach the coast of Morocco, where they stand looking at Spain across the narrow Straits of Gibraltar. On reaching Tangiers, the invisible travelers go their separate ways and prepare to attempt the fateful crossing to Spain.

Mostefa Djadjam’s beautiful debut feature confronts the global controversy of refugees while examining the complexities of human nature. Djadjam, originally trained as an actor, gives a restrained, compassionate account of what is at stake for illegal immigrants, fashioning a stunning film for its subtleties about identity. He presents consistent moral questions, demanding judgment on the decisions and actions of his characters when even the most sympathetic become ruthless and callous in their quest for a better life. The trip in Borders is not easy for either the travelers or the viewer who must watch these sad all–too human beings endure physical and psychological hardships before attaining “freedom.” Not all the travelers succeed. Some find love – some manage to laugh. The viewer, meanwhile, gains a new understanding of the problems which confront Africa-and more importantly, Africans-today.